Just a thought that crossed my mind: in today’s Virtual Reality, computers are used to simulate reality in a virtual setting, but when the first computers became available in the 1940’s, they were used by mathematicians for exactly the opposite. 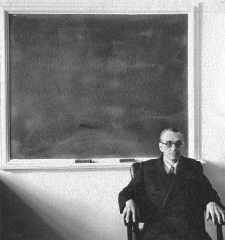 For centuries, they had been creating all kinds of virtual worlds inside their minds, supported by little more than paper or a blackboard. Mind games, where everything was allowed, as long as you could prove it from self-postulated axioms. The principle of fractals or the concept behind cellular automata, for instance, had already been developed long before their fascinating complexity could be visualized.

The arrival of computers offered previously unthinkable possibilities to visualize these virtual worlds ‘for real’ (Real Virtuality…?). By studying the results, scientists developed many new insights and ideas. Nevertheless, true geniuses obviously don’t need VR or RV. Kurt didn’t even use his blackboard…

* Kurt Gödel was an Austrian mathematician, most famous for his Incompleteness Theorem.