While still in an early stage of research for my Internet Radio (previous post), I came across Ed Smallenburg’s comprehensive Esp-radio project on github. It’s a very well documented project with a heavily commented sketch.

Instead of proceeding with my own (basic) Internet radio project, I decided to take Ed’s nearly flawless Esp-radio as a starting point, and adapt it according to my personal needs. Most important change will be the addition of two small oled displays for emulating analog VU meters.

There’s also an (even better?) version for ESP32 by the same author. This persuaded me to finally enter the ESP32 world, so now I’m the proud owner of a Wemos LOLIN32 Pro. My hope is that this powerful dual core board will be able to drive the entire setup of radio, TFT touch display, IR remote and VU meter oleds.

Unfortunately, my Wemos LOLIN32 Pro is from a batch with a faulty serial chip (CP2104). Most of the time, my PC will not recognize the board when I connect it, resulting in the serial chip becoming very hot within 5 seconds. This is my fourth Wemos device, two of which were crap!

However, when the board is recognized, it works fine and I even managed to upload and run the ESP32-Radio sketch. As for performance, I would say that both versions (ESP8266 and ESP32) seem equally satisfying and stable.

Below is a screenshot of the web interface. I removed and changed some buttons from the original version, and added a “now playing” display that updates every two seconds. 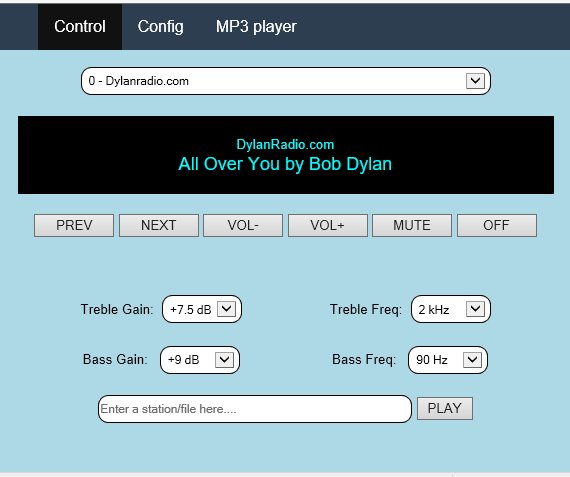 My futher plans with an ESP32 based Internet radio will have to wait for the replacement of my board. Planned changes are mainly peripheral and cosmetic, like adding VU-meters and a frequency analyzer. To be continued (stay tuned…)