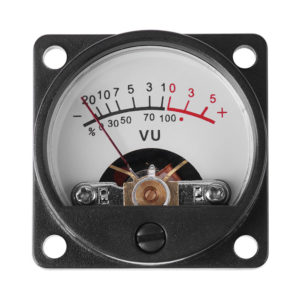 My nostalgic love for analog VU meters made me buy two of these little Chinese guys. They contain good old-fashioned incandescent bulbs and came in a kit with an analog control board. Build quality looks OK and everything works as expected, although the control board seems to be designed to power LEDs instead of incandescent bulbs.

While preparing to connect them to my VS1053 audio decoder breakout, I discovered that additional functionality can be added to the VS1053b chip by means of plugins. One of these extra plugin functions allows you to digitally read VU meter levels! This means that, instead of using the analog control board from the kit, I can let an Arduino (or other MCU) translate digital VU levels to PWM values for driving the meters directly from GPIO pins (these simple VU meters are basically just volt meters). This provides total programmatic control over the meters’ ballistics.

Plugin files for the VS1053b chip can be found on the VLSI Solution site. Documentation can be a bit confusing for beginners like me. It took some research before I understood the mechanism, but then it was easy to upload a plugin, enable the VU meter and actually read its values. Here’s some info that might help (when using Arduino or ESP boards):

After I posted an issue with the VU meter plugin on their forum, the VLSI support team were kind enough to release a new version that fixes it. Now I can read decibel levels directly from the VS1053b chip and control my stereo VU meters with two GPIO pins.

Update: the plugin turned out to provide ‘leaking peak’ levels instead of real time readings, forcing me to do some programmatical reconstruction work.

Here’s a video of The Swinging Needles.