Soon after my start with Arduino, I bought an external 32KB EEPROM, just in case a future project would need more memory than the board’s modest SRAM. But when I finally needed it for a sketch, I realized that the 300 KByte RAM of my 480×320 TFT display could be used for this purpose as well.

I had used pixels as memory before in visualisations of IFS fractals, where I made each pixel keep track of the number of times it was ‘hit’ by the iteration process, and then color it accordingly. Recent examples are this autumn inspired version of Barnsley’s Fern and this conifer-like fractal, based on an example on Ken Brakke’s IFS page. Both fractals were produced by an esp8266 on a 320×240 TFT display (ili9341). 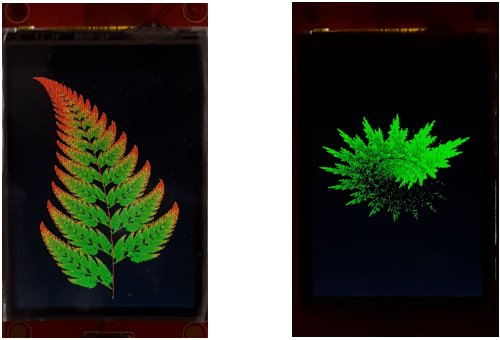 Using a display as external memory for projects brings memory intensive algorithms, like the A* path search algorithm for my 15-Puzzle project, within reach of Arduino and ESP boards without PSRAM. The only prerequisite is that your display library lets you read single pixel values. Bonus: leaving the display’s backlight on will show a ‘brain scan’ of the sketch in progress.