Odd fluctuations in my PiAware ADS-B receivers’ coverage graphs made me wonder how AGC in dump1090-fa really worked, because information on the subject is contradictory. A common technique for gaining insight into a process is by studying its anomalies, and the following announcement offered a promising opportunity.

For one of my receivers, air traffic over Belgium is the main source of ADS-B messages, especially in the 80-160 km range. So I was expecting to collect substantially less position broadcasts during the 24-hour strike. That proved to be the case, but I also noticed something else: for the first time since I permanently mounted the antenna outside, I was finally receiving a considerable amount of long distance (420+ km) positions again. 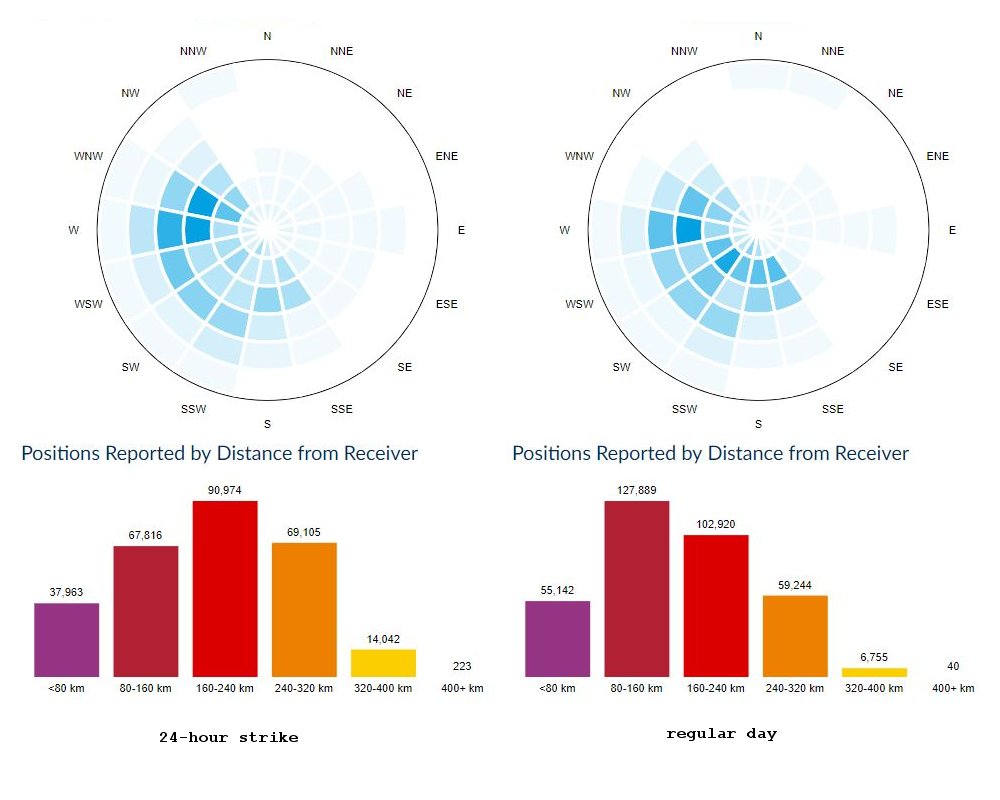 [Note that the bar graphs have different scales]

I recognized the above behaviour from the time when my antenna was still mobile. It always occurred immediately after moving the antenna from inside to outside the house. The effect would then gradually fade during the next couple of hours.

Conclusion so far is that many strong (relatively nearby) messages will make the AGC mechanism gradually reduce the receiver’s sensitivity. This may be beneficial for the total number of aircraft seen, but it comes at the cost of long distance reception. Once the strike was over, long distance reception dropped again within a couple of hours.

I’ve been experimenting with fixed gain values in order to receive more long distance aircraft, mainly to determine how far my receiver could reach. However, none of the allowed gain values gave results that resembled what I got during the 24-hour strike, or shortly after moving the antenna from inside to outside. Could it be that AGC does more than just adjust the receiver’s gain?