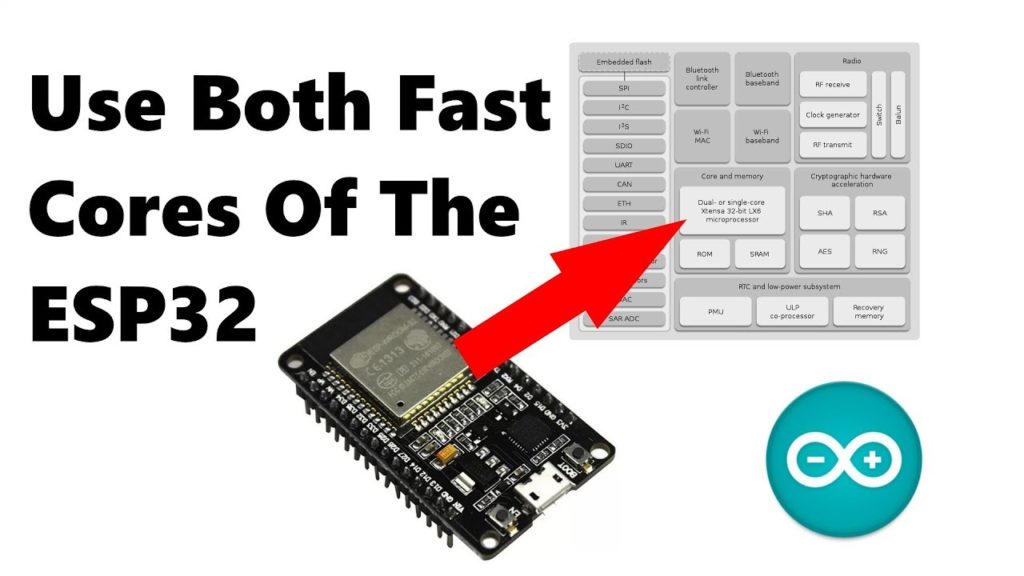 Almost a year after finishing my ESP8266-based Internet Radio project, I still have had no idea why running that sketch on the much more powerful ESP32 produces a heavily stuttering sound, resembling Michael Palin in “A Fish Called Wanda”.  So I wondered if I could solve this problem by dividing the audio streaming process between the ESP32’s two cores: filling the audio buffer on one core, and feeding the VS1053 decoder from that buffer on the other core.

Thanks to its builtin FreeRTOS, pinning a task to a specific core of the ESP32 is easy:

2. Create a task handle for the task in the main section of the sketch:

3. Create the task, specifying which function it should execute on which core:

(Since there was nothing in my loop() function (yet), I put a delay(1000); command in it. The loop() function runs on core 1, and I didn’t want it to claim too much of that core’s processor time.)

So my Radio sketch will have two independent tasks running on different cores: one that listens to the radio station’s audio stream for filling the circular buffer, and one for feeding the VS1053 decoder with bytes from that buffer. Both processes maintain their own pointer for accessing the circular buffer and the code guarantees that they will never catch up with the other process’ pointer. So there is no need to use a semaphore.

However, my first step into the dual core business produced an error. A ‘watchdog timer’ had become nervous and halted the ESP32. It turned out that including the following line in both functions solved at least that problem (bug?):

Now the ESP32 no longer crashed, and it actually produced sound. But alas, it was Michael Palin again…!

I can’t think of any reason for this behaviour. The serial monitor shows that the ESP32 has no problem filling the 30 Kbyte circular buffer, so feeding the VS1053 seems to be the bottleneck. I swapped cores for both tasks, but that didn’t help.

UPDATE: Meanwhile, I had become so desperate about finding a solution that I renamed the project “dESPeRadio“. But then, during a sleepless night, I wondered if the ESP32 might perhaps need a different policy for filling the circular buffer. The chunks it reads from the WiFi client per loop cycle have an upper size limit of 1024 bytes, in order to prevent the VS1053 from running dry during the process. But I didn’t specify a lower size limit.

For the ESP8266 this was OK, but the EP32 is so fast that, after it has rapidly filled the circular buffer, there will never be more than just a couple of free positions in the next loop cycle. All following cycles will therefore be very inefficient, causing so much overhead that the VS1053 actually runs dry in a very regular time pattern – the stuttering.

So I added just one single line for skipping the fill cycle if there’s less than 512 bytes of free buffer space available and uploaded the sketch without much hope, because so many ‘good’ ideas had failed before. What followed was complete silence…, which then turned out to be the pause between two movements of  Brahms’ fourth symphony! Then the music started in clean and, above all, uninterrupted sound!

The radio has been running non-stop now for a couple of hours. It looks like I finally have a solid and stable foundation for further development of my dESPeRadio on ESP32. Although using two cores isn’t necessary, it will be nice way to explore FreeRTOS.

In order to keep the code clean and readable, all future features and controls will be implemented as (optional) includible header files. I’ll make the full code available in my first github repository soon, so if you’re interested, stay tuned.

Plans for additional control options, apart from the already implemented keypad, are: