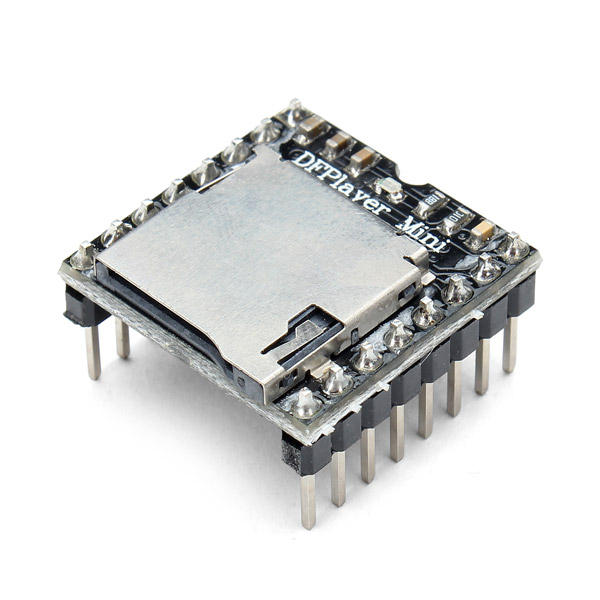 This little €4 module filled my entire weekend, mainly spent on finding the right documentation and a library that will work on Arduino, ESP8266 and ESP32. It’s a DFPlayer Mini MP3 Player from DFRobot (or, more likely, one of its many clones).

It can play MP3 and WAV files, stored on an SD card in the onboard card reader or from an attached USB drive. So far, I only tested MP3 files from SD.

You can connect one (4 Ω) speaker to the (quite impressive) onboard mono amplifier. Stereo line output is said to be provided on the DAC_R and DAC_L pins.

The main control method of this player is via commands over the module’s 9600 baud serial port. A subset of most commonly used commands can also be executed by means of two GPIO pins and/or two resistor-sensitive ‘ADKEY’ pins.

I made a false start by testing it on an ESP32 over hardware serial. That didn’t seem to work, so I tried an ESP8266 over software serial. That didn’t work either, and I had reached the point of giving up, assuming it was just another Chinese fake, when I gave it one more try on my good old Arduino Uno. With a quick & dirty 1K resistor for level shifting the module’s RX pin, the example sketch of one of many libraries finally made the little guy play me a song! In the end, it was the power supply that made the difference.

Some important things that I learned so far: 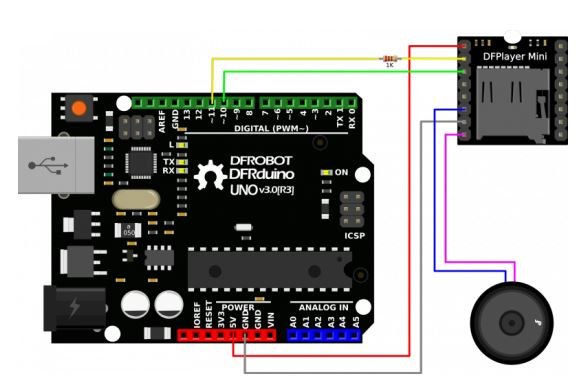 The location of files and their names is also very important because of the way commands address them. All information can be found in the datasheet, but here’s a summary:

Apart from adding some extra functions to the above mentioned library, I still have to find out how to reliably receive and read the module’s response to commands and queries. Once that I’m in full control over this (for its price) remarkably versatile module, it will be useful for a couple of ‘talking’ projects that I have in mind. Probably just mono and not ESP32 driven, but anyway: lots of fun for just €4.

Here’s an example of a function that I added to the DFPlayerMini_Fast library. Calling play_in_dir(2, 5) will play file 005.mp3 in subdirectory 02.

Using an existing function as a template, I first added my new function to the DFPlayerMini_Fast.cpp file:

Then I added these two accompanying lines to the DFPlayerMini_Fast.h header file:

and (inside the code for the class):

Explanation: according to the datasheet, the 10 (hexadecimal) bytes that have to be sent (by the sendData() function) to play track 005.mp3  in directory 02 are:

7E FF 06 are the first three bytes for every command. The following 0F is de code for ‘play a file in a direcory’, the following 00 means ‘no confirmation feedback needed’ and is followed by the two parameters for the desired directory- and file number: 02 and 05. Then comes xx xx which are two checksum bytes that will be calculated and replaced by the findChecksum() function of the library before the command is sent by sendData(). Finally, every command has to be closed by EF.

As you can see, my newly added function play_in_dir() takes two parameters only, corresponding with two bytes in the command sequence. All other bytes of the sequence are either fixed or calculated by the findChecksum() function.