Studying John von Neumann’s self-reproducing universal constructor* reminded me of some unfinished business in my earlier Cellular Automata (CA) projects. Always looking for coding challenges, I wondered if I could write a sketch for simulating self-reproducing CA loops that would fit inside an ESP32.

The general idea is to have a 2-dimensional grid of cells, each of which can be in one out of n states. These cells periodically change their states simultaneously, according to a set of rules. Each cell complies with the same set of rules, which lets it calculate its new state based on its current state and that of its direct neighbours. The way this ‘organism’ will evolve also depends on its initial pattern. A self-reproducing CA is a combination of states, rules and initial pattern that will continuously produce copies of the initial pattern, that will produce more copies of the initial pattern… etc. etc.

I guessed that Von Neumann’s universal automaton, with its 29 cell states and large set of rules, could be well out of ESP32’s league. Fortunately there are some famous (be it less universal) simplifications, so I started with the simplest one I could find: Chou-Reggia-2.

The video shows the indefatigable CA at work, producing ever more copies of the initial pattern (just 5 cells). It mimics a much sought after form of life: old cells don’t die… 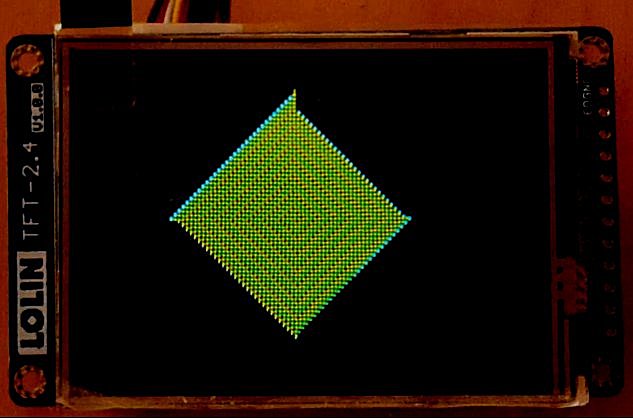 They’re just like kids, they grow up so fast 😉

In order to squeeze my Chou-Reggia-2 algorithm into the ESP32, I had to come up with some new programming- and storage techniques for cellular automata. I ended up writing a framework for CA sketches, that can import start patterns and rules from Golly. It runs on ESP32 WROVER modules, using PSRAM for storing a double display/states buffer. The two cores of the ESP32 cooperatively calculate a new grid state based on the current one.

As a proof of concept for the new framework, I initialised it with the specific data for Langton’s Loop, an automaton similar to Chou-Reggia-2, but with more rules. Everything worked fine, as did two slightly more complicated automata that have variables in their Golly rules, as well as substantially more states: Evoloop-finite and Perrier Loop.

Now that I have it up and running, my CA framework for ESP32 WROVER modules reduces simulation of most 2D cellular automata to feeding it with their specific data: states, transition rules (with or without variables), neighborhood (Moore or Von Neumann) and rule symmetry, all imported from Golly.

[ After further optimization, my CA sketches run 5x faster than what is shown in the videos! ]

Because every ‘cell’ is represented by a single pixel on a small 2.4″ display, I had to zoom in on the pattern in order to show the difference between ‘living’ and ‘dead’ cells (Langton’s ‘organism’ grows like coral: inner cells die, but their cell-walls are preserved).