Borrowing most of its code from my What’s Up? air traffic monitor, this small project uses publicly available live data for showing current position, altitude and velocity of the International Space Station on a small TFT display. The original version draws the ISS and its trail over an ‘equirectangular’ map of the Earth, also showing the actual daylight curve and current positions of the Sun and the Moon.

The video below shows the ESP32 variant, but with a couple of small adaptions, the sketch will also run on an ESP8266. As usual, my camera does little justice to the TFT display…

Position and data are refreshed every 5 seconds, during which time the ISS has travelled almost 40 km! The backgound image also needs to be updated every 270 seconds – the time in which the daylight curve will have moved one pixel to the left over a 320 pixels wide equirectangular Earth map. I used the station’s previous and current position for calculating the icon’s rotation angle. This is just to indicate the station’s heading, and doesn’t refer to its actual orientation in space, of course.

The newer version below takes a different approach by keeping the ISS in the center of a rotating globe. In reality, the display looks much better than in this video.

I also made a third version that keeps the ISS icon in the center of a moving Google map with adjustable zoom level, but that requires a Google Maps API key.

This project seems very suitable for educational purposes. With just an ESP board and a TFT display, students can quickly become familiar with C++ coding and some essential maker techniques like Internet communication, JSON parsing and image processing. As a side effect, they will also learn something about Earth movement, cartography, stereometry, Newton’s laws and space research.

This first post of 2020 just shows some videos of mini projects from the past 3 months.

Here’s an improvement (I hope) of my previous attempt to simulate fire on a small TFT display. I’ve added a glowing particles effect, did some parameter fine tuning and changed the color palette. The simulated area forms a layer over a jpg image, read from SD card.

Alas, my phone’s camera misses most of the improvements…

The next video shows the tesselation process of a 2D area according to the Majority Voting principle. In the initial state, every pixel randomly gets one out of three* possible colors. Then, in each (discrete and simultaneous) next step, every pixel takes the color of the majority of its ‘neighbours’. It’s no surprise that the chosen definition of neighborhood has great influence on this self-organizing process and its final state.

* The classical example uses 2 colors, but I chose to have 3 for a more fashionable (?) look.

Finally, meet Perrier Loop, the most complex Self-replicating Cellular Automaton that I managed to squeeze into my cellular automata framework for ESP32 (so far).  Grid cells can be in one out of 64 states (colors). Their state transitions are governed by 637 rules that use 16 variables (placeholders for up to 7 states, so the real number of rules is much larger). Each cell complies to this exact same set of rules to determine its next state, based on its current state and that of its 4 orthogonal neighbours (Von Neumann neighborhood).

I’ve always been an Adafruit fan, gladly supporting their open source contributions by buying their products. But recently, I was very disappointed by the bad performance of their TCA9548A 1-to-8 I2C Expander.

I had bought it to be able to drive two identical SH1106 OLED displays without having to solder on one of the displays in order to give it a different I2C address.

First I ran an I2C scanner, and the result looked promising: all connected I2C devices were detected with their correct I2C address. But then, driving a single display only worked if it was connected to channel 0 of the expander. And even then, the display would often show errors.

Then I tried a DS3231 Real Time Clock, because there’s very little I2C traffic involved in reading  the time from this simple and reliable chip. Even when connected to channel 0, setting the clock didn’t work well and readings of a correctly set clock were mostly  messed up. Since this expander seemed unable to reliably drive a single device, there was no sense in trying to connect multiple devices.

[UPDATE 15-01-2020] quite unexpectedly, I found the *solution* on an Adafruit forum! The multiple-sensor example sketch in Adafruit’s tutorial for this product misses an essential line. After putting the line Wire.begin() in setup(), that is: before the first call of tcaselect(), the module works fine! Wonder why they don’t correct this in their tutorial.

Turning an Arduino into an invincible Tic-Tac-Toe master is hardly a challenge, but I wrote a sketch for it anyway because I need it for a more ambitious project. For that project, I also had to design a couple of flawed Tic-Tac-Toe strategies with different levels of ‘vincibility’.

Next, I’ll have two Arduinos play matches against each other and analyse the outcome for all combinations of competing strategies. Now the strategies can be ordered based on their success rate.

The final goal is to make the Arduino act as a Tic-Tac-Toe trainer for beginners. While guiding their learning process by letting them play against increasingly better strategies, I can monitor their progression and compare it with the learning process of an Artificial Neural Network (ANN), for which I’m currently writing a sketch. Will 2,000 bytes be able to keep up with 100,000,000,000 human neurons?

This is a work in progress. For now, the video shows the Arduino in invincible mode, with me playing at the level of a befriended nation’s president. I even managed to put myself in a lost position after my very first move. It definitely takes some skills to loose this game…

Just a thought that crossed my mind: in today’s Virtual Reality, computers are used to simulate reality in a virtual setting, but when the first computers became available in the 1940’s, they were used by mathematicians for exactly the opposite. For centuries, they had been creating all kinds of virtual worlds inside their minds, supported by little more than paper or a blackboard. Mind games, where everything was allowed, as long as you could prove it from self-postulated axioms. The principle of fractals or the concept behind cellular automata, for instance, had already been developed long before their fascinating complexity could be visualized.

The arrival of computers offered previously unthinkable possibilities to visualize these virtual worlds ‘for real’ (Real Virtuality…?). By studying the results, scientists developed many new insights and ideas. Nevertheless, true geniuses obviously don’t need VR or RV. Kurt didn’t even use his blackboard…

* Kurt Gödel was an Austrian mathematician, most famous for his Incompleteness Theorem.

It was only after 37 (!) years of service that my vintage Texas Instruments TI-58 programmable pocket calculator stopped working. Actually, the calculator was still fine but one of its original NiCd batteries had finally passed away.

My TI-58 has always been ‘my precious’. Its (by modern standards) limited memory size inspired me to design smart algorithms and to write efficient programs.

This was, however, a very powerful calculator in his days. A special version was built into the famous Harrier aircraft to perform all calculations needed for stabilizing the airplane during vertical takeoff and landing!

Although the NiCd batteries were standard AA type, they turned out to be sealed inside the battery cover and had spot welded contact strips. So some minor surgery was needed in order to replace them with a set of fresh 1900 mAh NiCds. 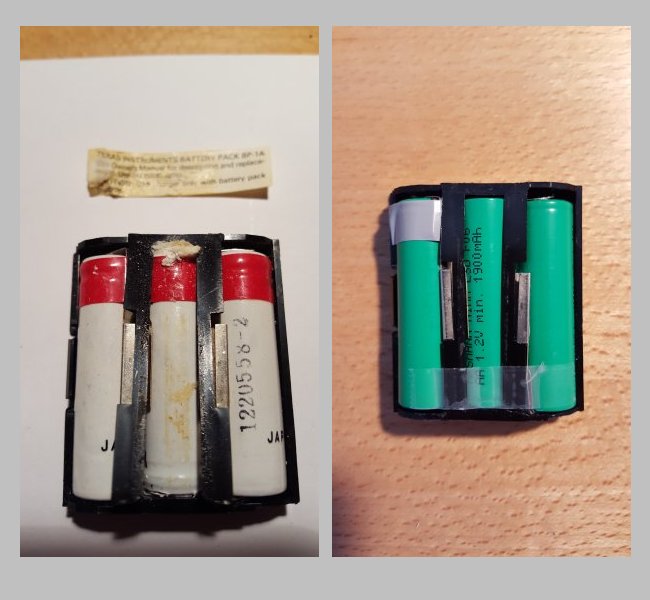 This shows the battery module before and after the operation. The tape was just a helping hand during surgery that I forgot to remove (happens in hospitals too). 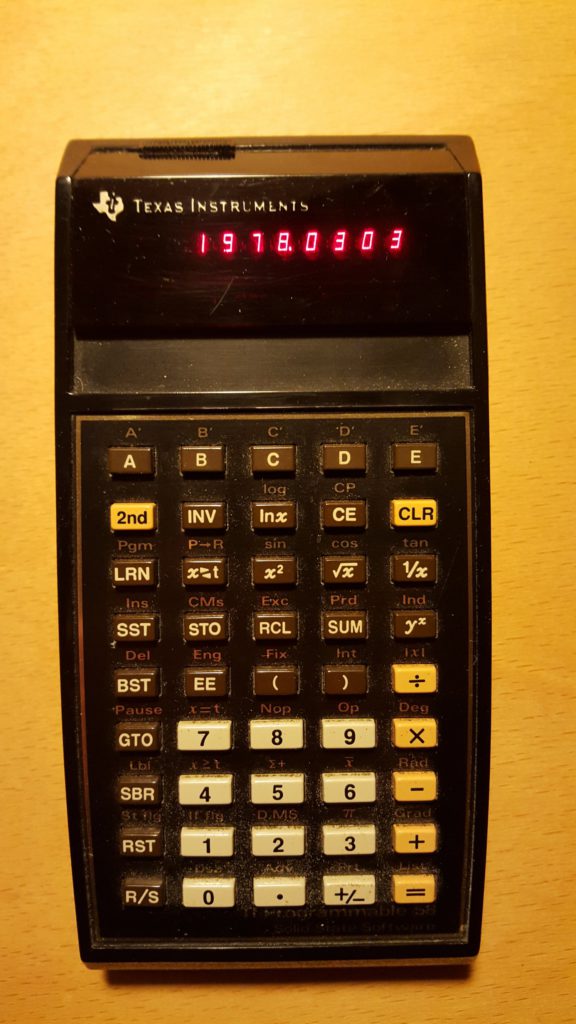 And there she is, my reborn baby, proudly showing her purchase date.

And finally she got reunited with the rest of the package.